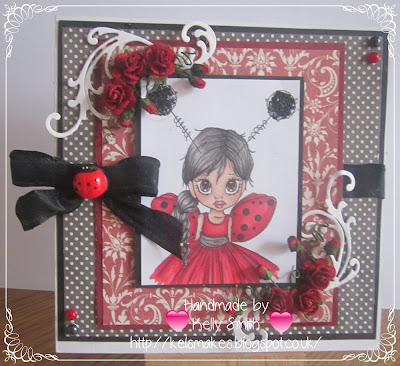 How cute is this little miss from Saturated Canary??
She is coloured with promarkers, her antennae have got black stickles on them.
The paper is from first edition J'adore pad
The flowers are from Wild Orchid Crafts
Ribbon and gems were in my stash

I would like to enter this into the following: 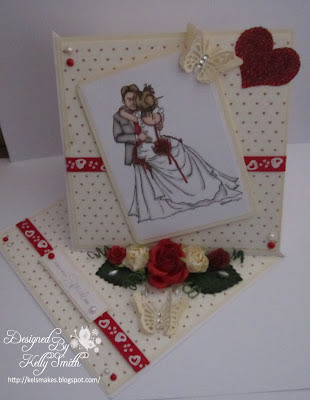 My best friends cousin is getting married next week and she asked me to make them a card, well obviously when you get married it is a special occasion, so i wanted to make something special! 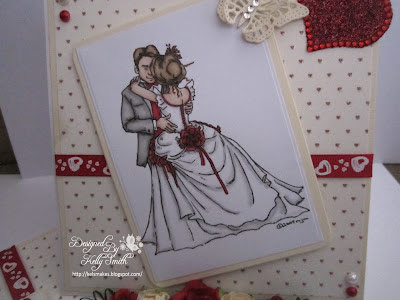 I immediately thought of The Wedding Dance by Mo Manning which i coloured with promarkers. 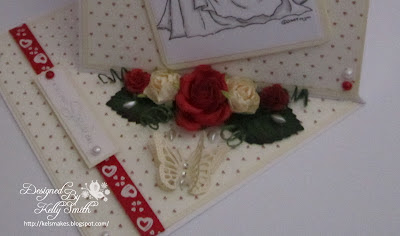 The paper is from Boofle and has tiny glittered hearts on it.
The butterflies are die cut from a Cheery Lyn die
The flowers and leaves are from Wild Orchid Crafts
The sentiment is Craftwork Cards
The rest of the items used are all from my stash.

I would like to enter this into the following: 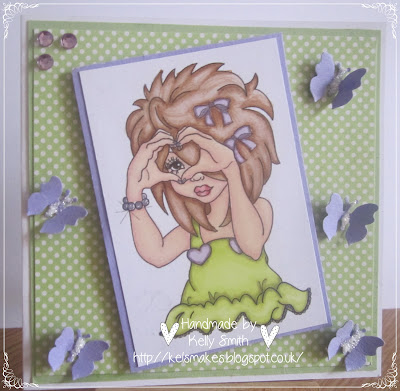 This gorgeous image was a freebie on Whimsy's facebook page a few weeks ago and i had printed her out but not coloured her! She is called One Heart
So another quick and simple card was on the books.
She is coloured with promarkers
Paper is Cart R Us (i think)
Butterflies were punched with a Tonic Studios punch
And that was it! 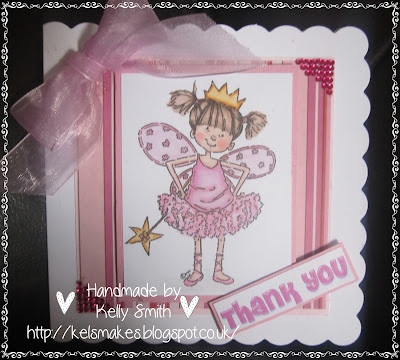 I coloured this little cutie a while ago and found her in my box of coloured images and i just had to use her!
The paper i had already mounted for something else and not used it for that, so i thought a quick clean and simple card it was!
The image is a Fairy Princess from Mo Manning and is coloured with promarkers.
Haven't a clue about the paper sorry!

Thank you for looking 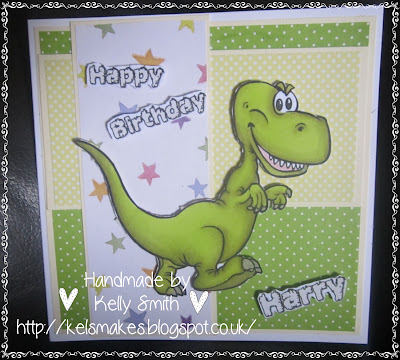 My little boy Jack's friend had a birthday last week and like Jack he is mad about dinosaurs! Well as i had left it to the last minute i thought i would buy a card for him, so off i trot to the shop and get what i thought was a good card, dinosaur and all.  I showed Jack when he came home from school and he started crying! When asked why he was crying he said, he wanted me to make Harry 1 as shop ones are rubbish and my ones are the best! So for the rest of the day i was a big headed mummy!

This is what i came up with, i checked on Google images for a suitable dinosaur, because all the ones i had, Jack said they were too babyish! So after tooing and froing with Jack he chose this one which was a colouring page.  I coloured with promarkers.
The papers were in my stash but i think they are papermainia.  Jack stuck the dinosaur and words down and said he was happy with that, so that was the finished result! 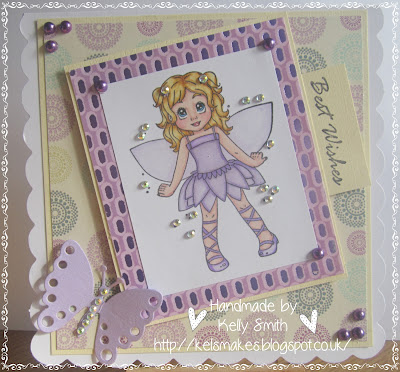 While going through my box of stamped and printed images the other day, i came across this cutie from Inky Impressions, I completely forgot i had her!
I coloured with promarkers.
The papers are the gorgeous New Bloom from First Edition
The Butterfly was in my die cut box

Man about the house 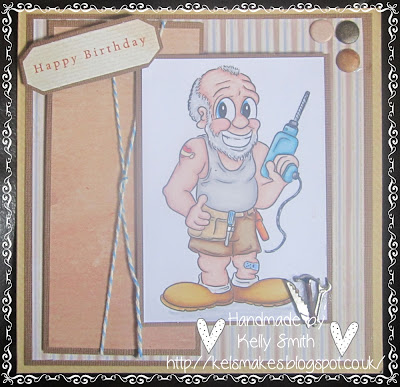 It was my uncle in laws birthday on Tuesday and being that he works with my husband as a builder/handyman etc when i saw this image i knew it was perfect! It is from Dr Digis House of Stamps and is called Man about the House.  I coloured with promarkers.
The papers are Docrafts Wellington range as is the sentiment.
The little tools were brads i had in my stash.

I would like to enter this into the following challenges:
Catch the bug - Anything Goes - 13/04 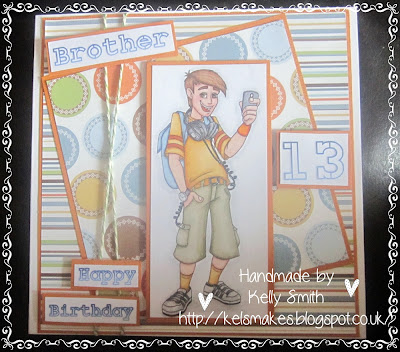 I was asked to make a card for a friends son who was 13, this was from their daughter.
Boys cards are not my favourite thing to do at all, only because i never know how to embellish them!
This image is called Trendy Teen from Redonkulous Designs and is coloured with promarkers
The papers are just 1 12 x 12 sheet from 3 bugs in a rug
The words were all digitally created

One of my best friends birthday was on Sunday and i wanted to make her a special card.  We have this little joke that she is 21 (although she's not lol) It took me forever to decide on the image but then i remembered i had these 2 cuties so that was perfect! 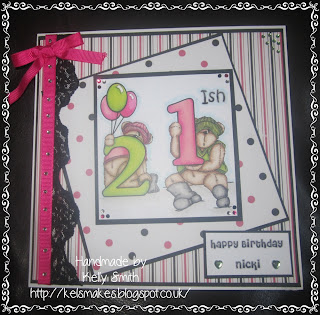 I coloured with promarkers.
The image is actually 2 separates from Teddy Bo.
The papers are from Craftwork Cards
The lace, ribbon and gems are all from my stash
The sentiment is digitally created in word.

Last week a good friend asked me to make her a card for a friend that was leaving work on Maternity leave to have a baby girl and this is what i came up with. 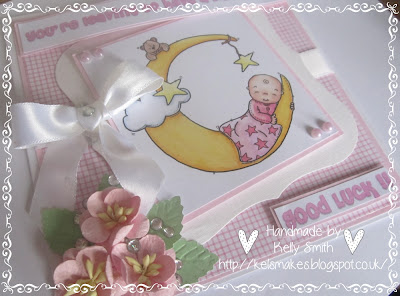 I used this gorgeous baby image from PollyCraft and coloured with Promarkers. 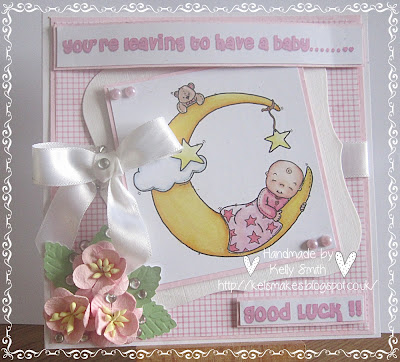 The paper i believe is from Dovecraft Back to Basics (really must keep all papers together!)
The ribbon and gems were in my stash
The flowers are from Wild Orchid Crafts and the leaves were punched from an Xcut punch.

I really liked it and i hope you do too.

And here is a quick card i made using a piece of scrap paper and a Kanban topper! 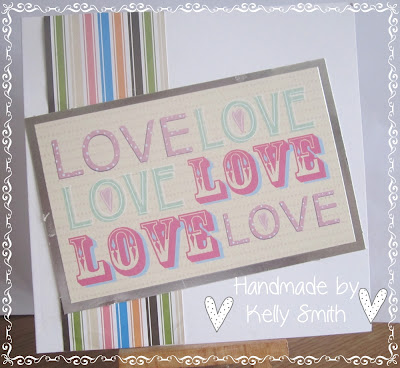 I would like to enter the baby card into the following challenges:

I love Magnolia, but hardley ever use them!!  I am more of a digi stamp user, but when i managed to buy this cutie for just £1.04!!! on eBay i had to use her! 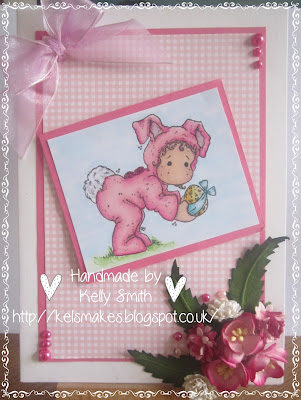 I kept this card really clean and simple, but effective (i think!)
As usual coloured with promarkers.
The paper is Back to Basics by Dovecraft.
The flowers are from Dottie 4 Crafts
The rest of the things were in my stash!

It's Easter at Digi Galore

This is my first post back as a Design Team member for Digi Galore  and i was so excited to join back in! 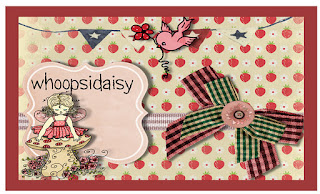 The design team were lucky enough to be given some cute images to play with, so i used these cute lovebirds! 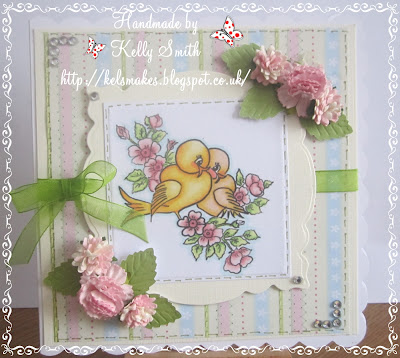 I coloured with promarkers. The paper was a freebie from a magazine, the ribbon was in my stash and the flowers are from Wild Orchid Crafts.

I hope you like it and we can't wait to see what you come up with!
Be sure to pop over and see what the rest of the fab DT have come up with!

Thank you for visting my blog please feel free to leave a comment or two!